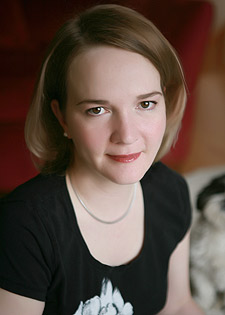 
I was born in Jackson, Wyoming, where I lived in an apartment above my father's drywall business and paint store. As a kid I spent a lot of time outside, climbing trees and scrambling all over the hills that bordered our town. I always liked writing stories, but I didn't become a serious reader until I discovered A Wrinkle in Time, by Madeleine L'Engle. I was totally hooked, read all of L'Engle's books, and then moved on to writers like Susan Cooper, Isaac Asimov, and Jack London. I dreamed about being a writer, and I even wrote the beginnings of a first novel in the fifth grade. It was called The Adventures of Kim D. Lavenport, and to this day, my mother is convinced it is my best work. Soon, though, I put Kim in a drawer and forgot all about her. I developed other interests, especially in acting and science, two areas in which I excelled. For a while, writing took a back seat.

I attended college in Omaha Nebraska and Madrid Spain before I finally ended up at The University of Wyoming, where I studied anthropology and Spanish language. During my last semester, senior year, I took a creative writing class from a great teacher named Vicky Lindner, and my interest in the written word was rekindled. I had rediscovered my first passion, and resolved that I would become a writer.

I moved back to Jackson and stayed with my father. I got jobs that were fun and mindless, and I wrote at night. Those first attempts amounted to immature drooling, and I'm glad I never sought publication for them. After a while, I found my small hometown stifling, and felt the need to stretch my legs somewhere else. I chose Burlington Vermont, almost arbitrarily, because so many of my favorite books as a kid had been set in New England. I loaded up my pick-up truck, drove across the country, and found a great apartment not far from the downtown area.

Vermont is where I got serious about writing. I didn't know a soul in Burlington, so my evenings were devoid of any social contact. I was terribly homesick for Wyoming, and found that writing about it helped me deal with the loneliness. I wrote the first draft of Shadow Falls during this time. It took me about six months. At the end of it, I got a few reluctant opinions from a couple friends, read it over myself, and realized that it wasn't very good. It needed something, but I didn't know what. I decided that the problem was I'd never studied literature, so I applied to the Masters program at the University of Vermont for English Literature, and was accepted.

I had some great teachers at UVM, and I learned a lot of theory about literature. My eyes hurt from reading so much, and my head hurt from thinking so much, but at the end I knew a lot more about what makes good writing, and I felt much more equipped to revise Shadow Falls and make it into something saleable. Once I was finished with that rewrite, I queried several literary agents, and was very lucky to gain the interest of one of them. It took her a year to place Shadow Falls, but the contract was with a major publisher, and I was ecstatic.

In the meantime, I decided I still had a lot to learn about writing, so I applied and was accepted to the MFA program in creative writing at The New School. My teachers here were brilliant and fascinating, and the students in this program were all intelligent and thoughtful. Rubbing elbows with such people helped me to grow as a writer and as a reader, and I made some very good friends who continue to serve as invaluable readers for my rough drafts.

Now I write full time in my house in Colorado, where I live with my cute fluffy dog and my cute unfluffy husband. Being a full time writer is a dream come true.

Fun Stuff About Me!

Ride my bike. Wind in my hair and all that.

Crush fresh garlic in a garlic press. It smells so good.

I also love the smell of freshly ground coffee. Mmmmmmmm.

Watch movies I've seen before. I find it relaxing.

Go on hikes in the mountains that don't last too long.

Stare out my window at my back yard, which is really pretty. Sometimes foxes and deer trot by.

Hang out with my brother watching cartoons.

Stand by the window during rainstorms. Especially if there's lightning.

Walk my little dog early in the morning when hardly anyone else is up.

Snuggle with my cute husband, both of us stuffed into one recliner.